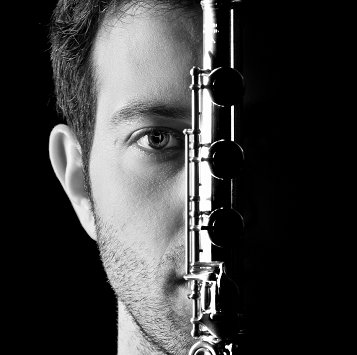 He has played under the Baton of conductors such as Daniel Barenboim, James Levine, Zubin Mehta, Daniel Harding and Christoph von Dohnanny, and participated in festivals such as the International Chamber Music Festival in Jerusalem, the Verbier Festival and the Lucerne Festival.
Solo performances with orchestras include the Verbier Festival Orchestra, BBC Scotland Symphony Orchestra, Jerusalem Symphony Orchestra and the Geneva Camerata.
Mr. Amotz has won first prizes from the International Flute Competition in Volos, Greece and the Pergamenschikow International Chamber Music Competition, Berlin. Scholarships include the America Israel Cultural Foundation scholarship for soloists, the Varon Foundation, Hindemith Foundation Berlin, and the LBBW Grant for promising talents.
Since 2005 he has been a principal player of the Verbier Festival Orchestra with which he toured Europe, Asia, Australia and South America, and since 2013 he is the solo flutist of the Geneva Camerata Orchestra – a new innovative ensemble that performs music of all periods and styles, from early baroque all the way to contemporary music.
As an avid promoter of contemporary classical music composed by the younger generation, Mr Amotz has collaborated with numerous composers and commissioned pieces for solo flute as well as flute concerti and chamber music. He is a member of the acclaimed Meitar Ensemble for contemporary music, with which he toured Europe, USA and Canada, performing in venues such as the Purcell Room London, Centre Pompidou Paris, Venice Biennale, Radial System V Berlin, Moscow Conservatory Hall and the Heidelberger Frühling Festival to name a few.
His teachers include Vladimir Silva, Avner Biron, Yossi Arnheim, Jean-Claude Gérard, Christoph Huntgeburth and Roswitha Staege, with whom he studied at the Berlin University of Arts where he graduated with high honors.
In september 2017 Roy has created a new music series, aiming to bring classical music to wider audiences, creating a transformative experience for audience and performers alike: „Music and Beyond“.
The first project in this framework is called Fantasies, and integrates the art of cooking and music into one whole, aiming to explore our senses without the domination of the visual engagement.